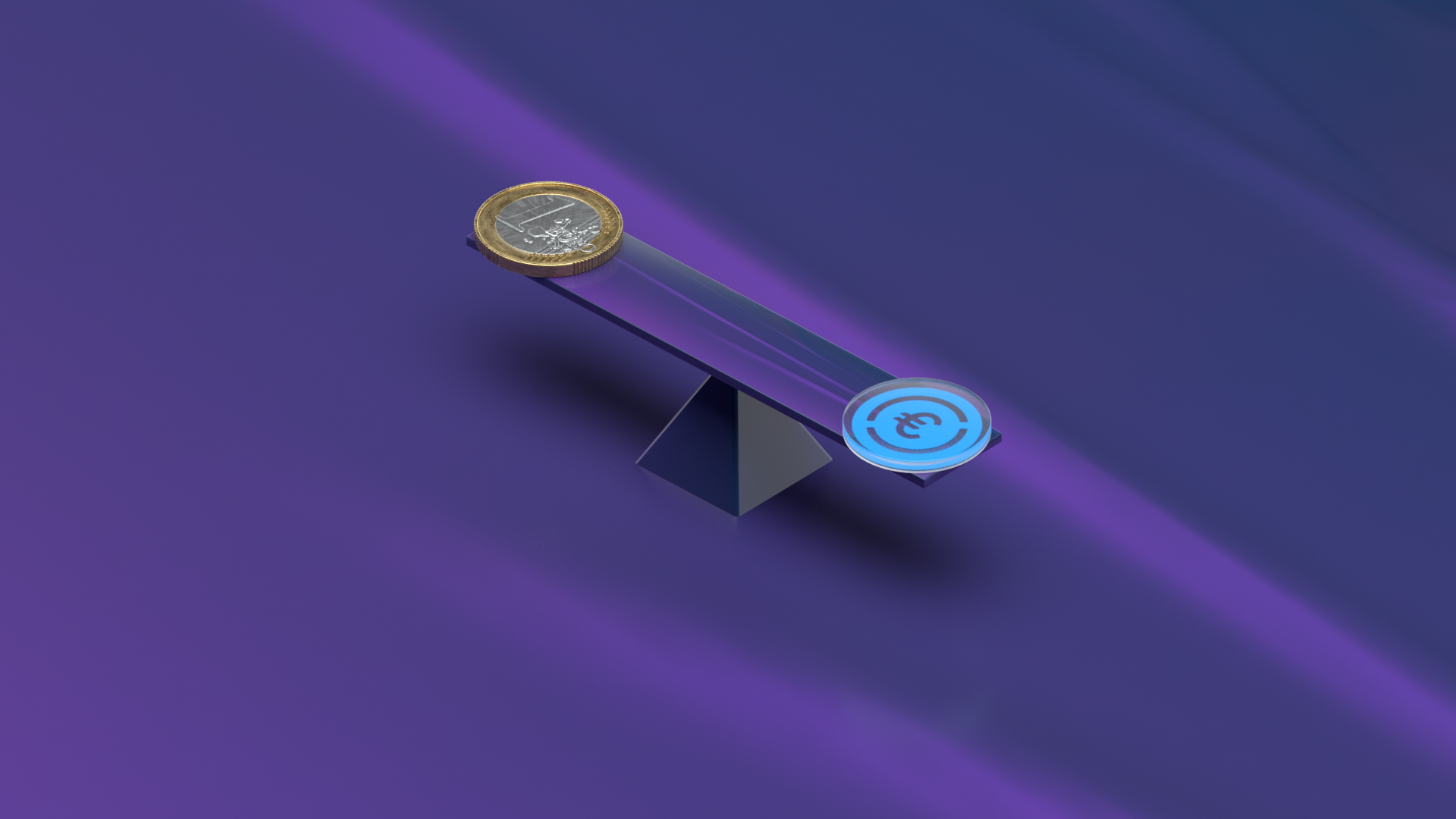 The world’s crypto and DeFi ecosystem does not exist in its own closed bubble: since Bitcoin was first exchanged for fiat currency in 2010, fiat on and off ramps have been crucial to the sector’s development.

In a previous Skytale blog post, we looked at the history of stablecoins and how different types of stablecoins are used. We learned how, while Tether is the largest collateralized stablecoin, USDC has hugely risen in popularity since its launch by the Centre consortium (founded by Coinbase and Circle) in 2018. USDC tracks the US dollar and is now available across many more chains than simply Ethereum.

USDC was also chosen as the medium for Visa’s first foray into blockchain-based settlements. Regulator-friendly, fully collateralized and transparent, it is designed to provide assurance of stability to institutions as well as individuals and has not had its collateral reserves called into question in the same way as Tether.

Now the consortium behind USDC has launched Euro Coin (EUROC), a stablecoin pegged directly to the euro.

While the crypto industry is global, the convention of quoting prices in USD, and most exchanges offering USD pairs as the default, has meant that stablecoins pegged to the dollar have overwhelmingly made up the majority of stablecoins, particularly collateralized ones. This also, of course, reflects what happens in traditional finance, where 75 per cent of all transactions globally are settled in dollars.

The euro is the second most popular choice for global settlements, so in some senses, it is surprising that a mainstream euro-pegged stablecoin has not been launched before now. Some euro-backed stablecoins with a small market cap already existed (including euro-backed Tether EURt, but the European Union’s MiCA framework, which classifies stablecoins as e-money tokens and demands issuers to have an e-money licence, has proved a strong disincentive.

In a surprise move on June 18, Circle announced the launch of the EUROC, a euro-pegged sister coin for USDC, which went into circulation on June 30 with this press release: “Euro Coin is a regulated, euro-backed stablecoin issued under the same full-reserve model and built on the same pillars of trust, transparency, and security that have made USDC one of the world’s most trusted digital currencies.”

Where can I get it?

EUROC’s ultimate purpose is to allow euros to flow on to both centralized and decentralized exchanges across the world, increasing the number and choice of trading pairs and boosting overall liquidity.

Initially available only to US citizens because of regulatory issues, EUROC will nevertheless be of greatest benefit for individuals and institutions within the eurozone.

Its initial launch is on Ethereum only, mirroring the history of USDC: you can see the EUROC smart contract on EtherScan here: https://etherscan.io/token/0x1aBaEA1f7C830bD89Acc67eC4af516284b1bC33c Over time, versions of USDC have launched on multiple chains including Avalanche, Solana and Algorand, and if demand for EUROC is strong, there is no reason to imagine the same trajectory would not follow.

EUROC is currently available via the following:

As liquidity builds in the ecosystem, trading will begin on exchanges. More exchanges are expected to support EUROC soon, including: Binance.US, Bitstamp, Bybit, and FTX.

The Future of Euro Coin

In its launch week, EUROC hit $55 billion in volume. Perhaps the biggest hurdle to its demand is the poor underlying performance of the euro itself. With EUR/USD rates sliding towards parity, people on social media have been joking that there was no need to launch a separate EUROC token because it will ultimately end up pegged to the dollar anyway.

Fiat exchange rates aside and once regulatory issues have been clarified, many people see a bright future for EUROC, especially when it comes to improving liquidity on exchanges, both decentralized and centralized, and taking advantage of arbitrage opportunities.

The availability of EUROC will also make life easier in the payments arena for businesses and individuals, particularly in the eurozone. Being able to receive payments denominated in euros from global customers and being able to pay vendors and team members in one’s own regional currency without having to worry about exchange rates is a powerful tool for growth and expanding cash flow – not to mention the added benefit of near-instantaneous settlements.

Skytale – Based in the Eurozone, with a Global Outlook

Skytale’s team is based in Berlin, with team members spread across the world. We have a global strategy and offer services to anyone, wherever they live. However, we also believe that the crypto industry within the eurozone has much unexploited potential and that improving access to liquidity and information in these countries is crucial for the growth of the ecosystem as a whole.

For this reason, we are optimistic that the launch of EUROC will open a new chapter for stablecoins and for the entire crypto sector.