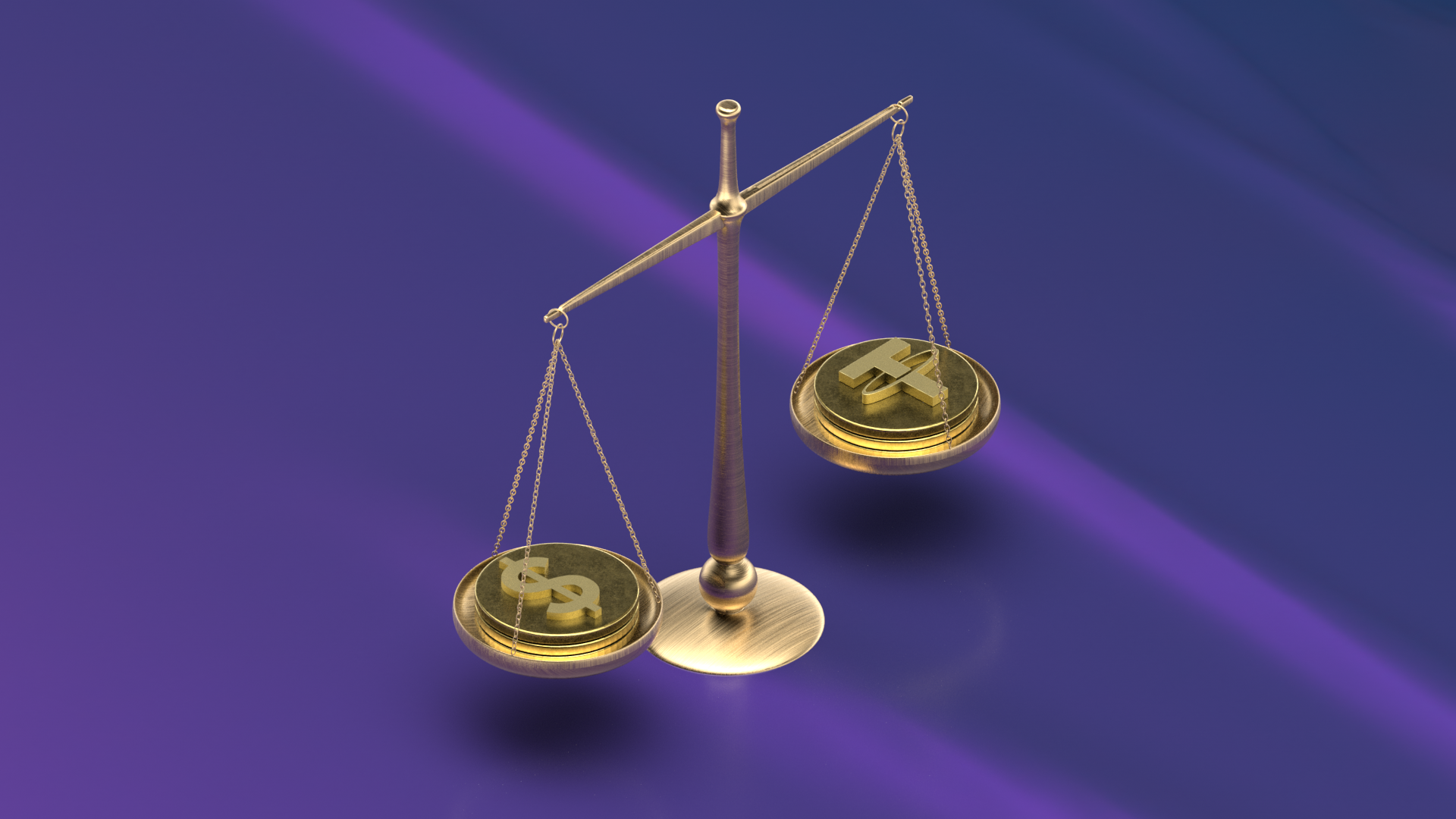 One of the criticisms people have about cryptos as a payment mechanism is their fluctuating value against fiat. This can potentially be a strength – in a high-inflation environment, cryptocurrencies such as Bitcoin or Ethereum may retain purchasing power while the purchasing power of fiat currencies such as dollars or euros reduce. However, uncertainty over the short term can cause problems for those who need to use their cryptos to interface with real-world goods and services.

Stablecoins share some of their characteristics with fiat currency and some with cryptocurrencies, and form a bridge between the two. Most stablecoins so far have been pegged against the dollar, so that one unit is worth $1, within a certain margin of error. Yet, because stablecoins are issued on top of a blockchain – most commonly Ethereum – they retain all the advantages of a cryptocurrency, such as instantaneous settlement, easy cross-border transactions and trustlessness.

Tether was the world’s first stablecoin, predating even Ethereum. A private company (Tether Ltd) began issuing tokens at a rate of 1:1 with the dollar, backed by dollar reserves held in banks, in 2014. The original Tether (USDT) was issued on Omni, a protocol layer on top of the Bitcoin blockchain. Later, after the launch of Ethereum, Tether made USDT tokens available as ERC-20 tokens on Ethereum. There has been much speculation that Tether was not fully backed at the 1:1 dollar deposit ratio that they had claimed, and in 2018 Tether fell to $0.88 temporarily before the situation was clarified. What happened was that originally their website used to read: “Every tether is always backed 1-to-1, by traditional currency held in our reserves.” This later changed to “Every tether is always 100% backed by our reserves, which include traditional currency and cash equivalents and, from time to time, may include other assets and receivables from loans made by Tether to third parties, which may include affiliated entities (collectively, ‘reserves’).” The controversy scaled up with an investigation carried out by New York’s Attorney General, which scrutinized the partnership between Tether and Bitfinex and that ended in a settlement agreement that bans Tether from doing business with anyone in New York.

In 2018 a consortium backed by Coinbase and Circle launched US Dollar Coin (USDC), promising more transparency and improved governance. Initially launched on Ethereum but now fully multichain, and issued on networks including Avalanche and Solana, USDC has even been used by Visa as a settlement layer.

While Tether and USDC were both issued in a centralized manner, DAI is interesting because it was the first fully decentralized stablecoin. It is governed by a smart contract on the Ethereum blockchain and allows anyone who deposits a specific group of Ethereum-based assets to mint DAI stablecoins. It was launched in 2017 and a DAO (decentralized autonomous organization) is responsible for deciding changes to its protocol, as well as the assets that are allowed to be deposited.

As we have seen above, while Tether, USDC and DAI might be issued on different blockchains by different types of organisations, they all have one thing in common: they are backed by collateral. This may be dollars, other assets or ETH, but they all rely on either trusting the issuing party or verifying a smart contract to ensure that there is sufficient backing to maintain the 1:1 dollar peg.

DAI, in common with other DeFi protocols, is overcollateralized. This means that in order to prevent reserves from falling below a certain level, minters of DAI get liquidated and lose their deposits if asset prices are too far against the dollar.

Other types of stablecoin are not backed by reserves of collateral but maintain their peg (their price against their nominated fiat currency) via a smart contract that manages the supply by consulting an oracle.

In plain English, this means that as the price of the fiat currency rises, so does the supply of the stablecoin. This must always be in balance to maintain the peg. As there is no way of introducing external data into a decentralized blockchain such as Ethereum, smart contracts use oracles – decentralized, trusted data sources – in order to validate the price of the fiat currency.

cUSD, a stablecoin issued on the Celo network is an example of an algorithmic dollar-pegged stablecoin.

Is a dollar-pegged stablecoin always worth one dollar?

So far, we have mainly looked at stablecoins that are pegged against the US dollar. However, stablecoins can be pegged to any national currency, or even a basket of currencies (the cREAL, which is pegged to the Brazilian REAL, was issued on the Celo network in January 2022, for example).

While the inherent design of stablecoins means that their value should be close to one unit of the currency they represent, in reality, this is a moving target and they can fluctuate slightly above or slightly below. At the time of writing, for example, DAI is listed at $0.9997 and USDC at $0.9999. The crisis of confidence in Tether which sent its price temporarily down to $0.88 was a highly unusual occurrence, and if a stablecoin were to permanently lose its peg in this manner, it would be deemed to have failed.

Integration with the legacy sector

More than two years ago, Visa announced their first settlement using USDC, which was an important step in bridging payments between the traditional financial system and cryptocurrencies.

At the time, they stated: “Support for digital currencies as a new type of settlement currency marks an important step forward for Visa’s network of networks strategy”.

As fintechs and banks offer new, crypto- and DeFi-focused products to their customers, expect this sort of integration to become more and more commonplace.